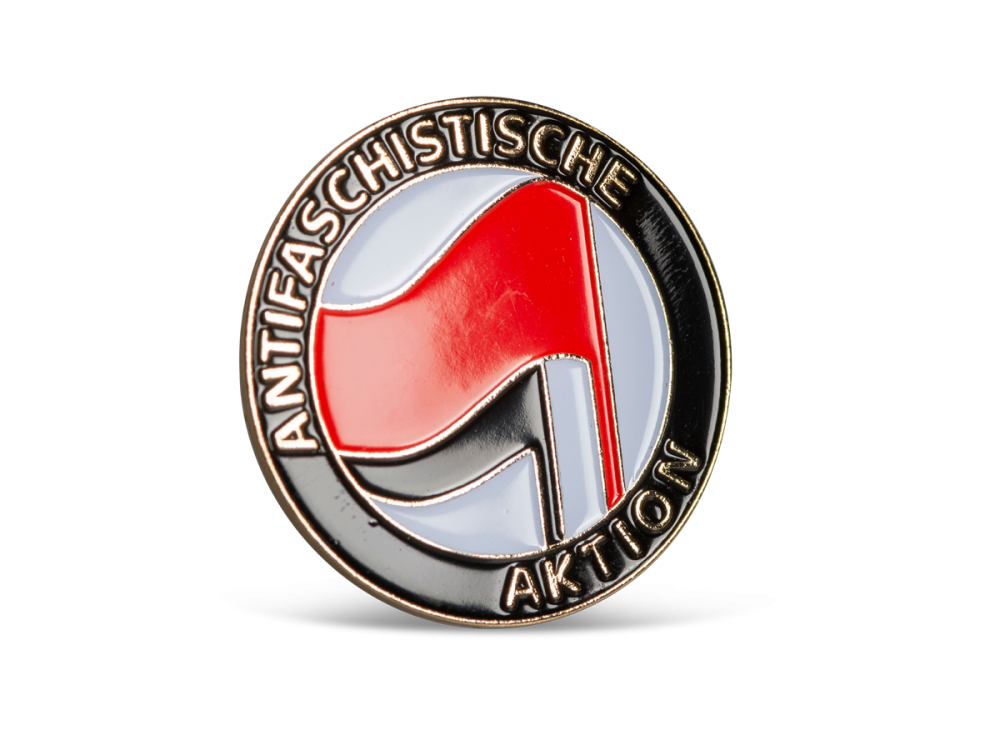 On the 26th September 2019 there was a heated debate in the Bundestag around a motion by the AfD (‘Alternative for Germany‘- German extreme right-wing party) for the “Review of a nationwide ban of the Antifa”. In her speech, Martina Renner thanked “the Antifa” for their unrelenting work and constant commitment to “opposing the advance of the Right in many places”. She stressed the “disastrous tradition of aversion with regard to left-wing politics and the equation of fascism and antifascism”. As a sign of her thanks she wore a badge of the Antifaschistische Aktion (‘Antifascist Action‘) on the lapel of her jacket, for which she received a call to order with the added threat of a fine. The vice president of the German Parliament Kubicki (FDP – German Liberal Democratic Party) saw the “honour of the house” violated by the Antifa-badge. Uli Grötsch (SPD – German Social Democratic Party) on the other hand, did not receive a call to order for wearing a badge of the Eiserne Front (‘Iron Front’) on the very same day. Kubicki gave further reasons:

The call to order to Die LINKE ( German Socialist Party) was intended to put an end to the tumultuous scenes, particularly of the AfD– a fatal signal of encouragement for the Right.

Christoph Bernstiel (CDU – conservative German Christian Democratic Party) said of the Antifa-ban: the Minister-President election in Thüringen in October 2019 must bring an end to the reign of “Antifa sympathisers” (The government consists of DIE LINKE, SPD and the Greens).

This demand, which was based on anti-Communism and Horseshoe-theory, was fulfilled in the election. CDU, AfD and FDP voted in collusive arrangement for Thomas Kemmerich (FDP). But through bouquet-throwing, demonstrations and the protests #Nichtmituns- Kein Pakt mit Faschist*innen: niemals und nirgendwo! (‘#Notwithus- No Pact with fascists: never and nowhere!’), the opened door for a conservative-extreme-right alliance in Thüringenwas able to be closed again. Thank you Antifa!

Martina Renner is a spokesperson for antifascist politics in the left-faction of the Bundestag.