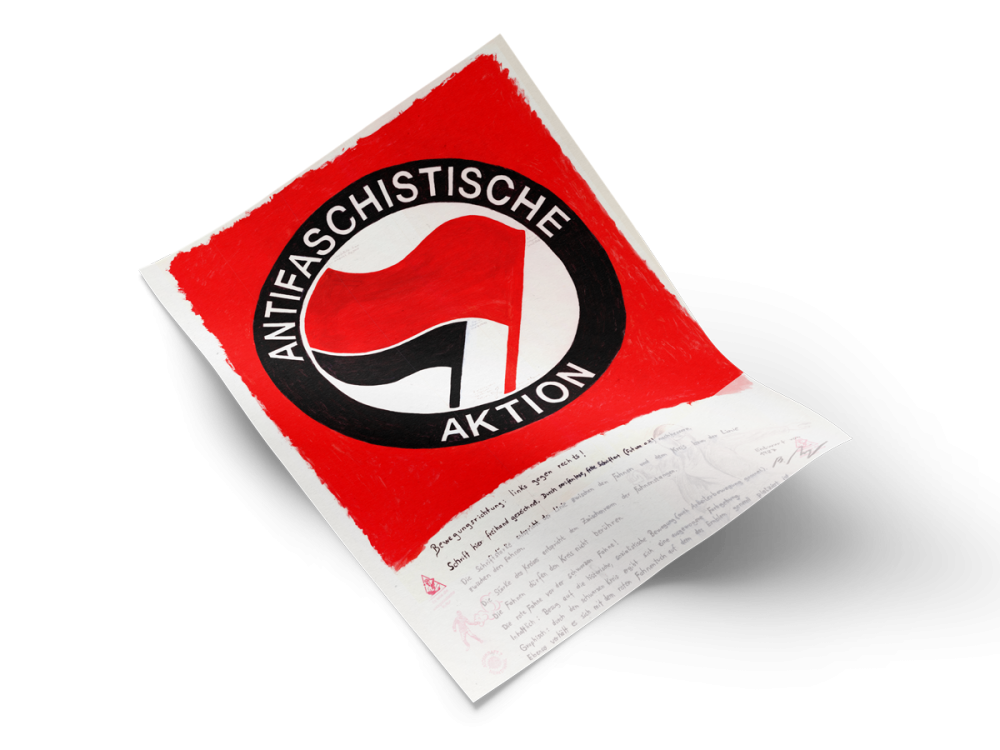 The present-day emblem of the ‘Antifascist Action‘ is the most frequently used symbol of the left scene and international icon of the fight against antifascism. It was designed in the 1980s by the autonomous Antifa artist Bernd Langer, who founded the cultural-political initiative Kunst und Kampf (KuK) (‘Art and Struggle’) in 1988.

Like the antifascist movement in Germany itself, the emblem can be traced back to the 1920s. It was designed in 1932 by the two Bauhaus graphic artists Max Gebhardt und Max Keilson as a commission from the KPD. The design (a red “life-saving belt” with two red flags for the SPD – German Social Party and the KPD – German Communist Party) was intended to illustrate the solidarity of both parties in the fight against fascism, the NSDAP and Hitler. However, the Social Fascism theory of the Stalinist Comintern undermined the joint struggle by simultaneously seeking to fight against the capitalist social democracy until 1935.

From the 1970s onwards, the fight against Nazism in the former FRG (‘BDR‘ – Federal Republic of Germany – ), saw the founding of many autonomous and anarchist Antifa groups, who strictly separated themselves as undogmatic from the KPD and SED (state party of the former GDR). In view of these developments, the 1932 emblem was outdated; they were missing a more contemporary symbol that would encompass all antifascist struggles. Bernd Langer represented the “New Antifascism” of the 1980s by placing autonomous and anarchist concepts (black flag) side by side with communist ideas (red flag).

Today, the emblem stands as an international icon of antifascist, anti-capitalist and also militant struggles in all their diversity. The iconic symbol has since been interpreted in countless variations.